The Oak, I Have Called you Friends, John 15:15. St Mary Magdalene, Holmwood, Surrey

You are here: Home1 / Ecclesiastical and Religious2 / The Oak, I Have Called you Friends, John 15:15. St Mary Magdalene, Holmwood,... 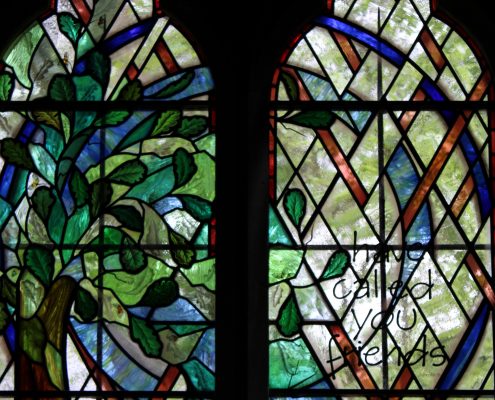 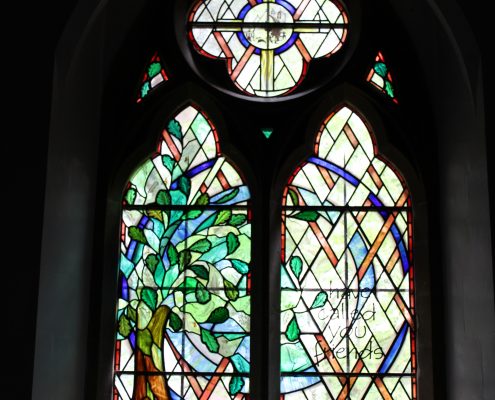 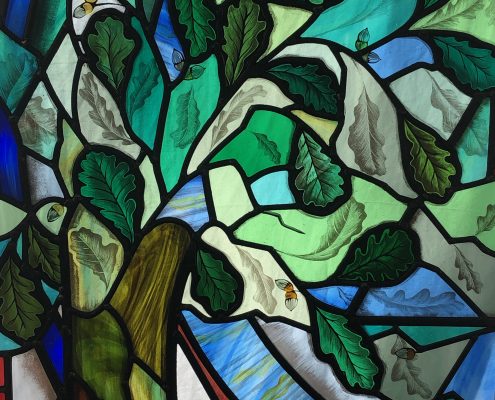 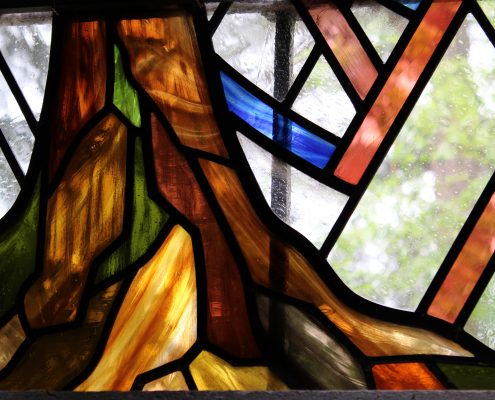 The themes of friendship and home are represented in this two light stained glass window with tracery.

The English Oak is called a “garden and a country” because of its warmth and friendliness to man and is widely regarded as an emblem of hospitality and strength.

St Columba had a fondness and respect for oak trees and his early chapel on Iona was constructed of Mull oak.

Traditionally couples were married beneath an oak tree and it is believed to be the first tree created by God from which sprang the entire human race. In fact, the Bible is full of references to the oak. Abraham supposedly received his heavenly visitors under an oak, Jacob buries all the idols of Shechem under and oak and under the oak of Ophra, Gideon saw the angel who advised him to free Israel. Saul and his sons are said to be buried under oaks and when Augustine preached Christianity to the ancient Britons, he stood under and oak tree.

What I found particularly fascinating was to discover that a lot of oaks were traditionally grown in close proximity to villages and when they were struck by lightning, (because they were often the tallest living feature in the landscape) and visibly and audibly wrought with the fire from Heaven, in the eyes of the ancients the mighty oak provided a channel through which the power of God could reach down to the world of men.

The oak tree is a fabulous host and it can provide habitat rich in biodiversity.  The oak supports more life forms than any other of our native trees. In summary, they are symbols of hospitality, strength and survival.

I have chosen to depict the oak tree to the left of the two lights with the out stretched branches reaching towards the door of the church. This evokes the oak trees’ warmth and welcoming toward parishioners.

The strong leaves represent us, the congregation, the people and the fainter leaves we can think of as those we have lost but they stay with us all our lives.

I have used all mouth blown glass, painted and silver stained in the traditional manner. The clear background glass is made in England by The English Antique Glass Company. The ruby border is made of mouth blown ruby flashed graded glass. This gives a beautiful dark and light, coming and going effect.

I have included the chosen quote, “I have called you friends” John 15:15 within the right hand light surrounded by clearer glasses, still mouth blown with beautiful textures, not unlike what was there before.

The woven theme of this window evokes the way in which the Christian faith touches every part of life. This is a design feature I have used before and works so well. In the centre I have placed a triangle, an ancient symbol of the Holy Trinity. Surrounding this are circles. The circle is a universal symbol representing perfection and wholeness. Since it has no beginning or end it easily represents God’s Love. I have used a deep lapis lazuli colour blue which also represents friendship and harmony within relationships. The inner circle is also a sun, a symbol of life and hope and the rays are painted on using traditional silver stain, of which there are already some fine examples within St Mary Magdalene.

In the top quatrefoil I have included the Friends logo of the church within the centre of a cross, again using silver staining.